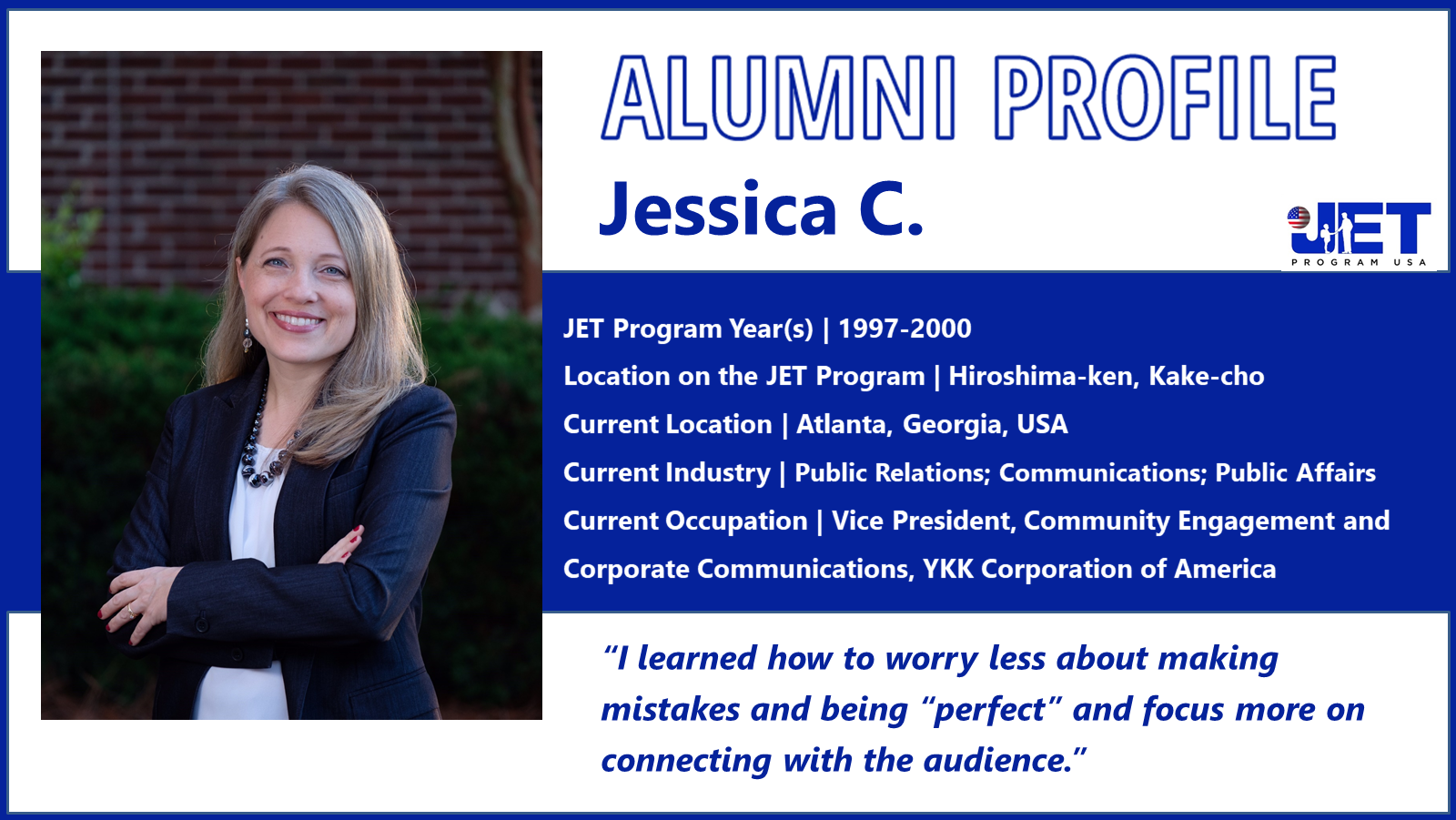 An interview with Jessica C, a 1997-2000 Hiroshima Prefecture JET CIR. Jessica is Vice President of Community Engagement and Communications at YKK Corporation of America.

My primary responsibilities include managing government relations, community relations, and internal and external communications for YKK’s North and Central America Group; serving as the regional liaison with YKK global headquarters in Japan for public relations and communications strategy; managing the region’s corporate philanthropy and community outreach programs; and leading our Philosophy and Core Values initiative.

How did you end up at your current position?

I joined the JET Program as a CIR after getting my B.A. in Japanese Language and Literature from the University of Massachusetts. After returning to the U.S., I moved to Georgia in order to take a position as an interpreter/translator at Kubota Manufacturing of America. I then worked as the advisor for educational and cultural affairs at the Consulate General of Japan in Atlanta for 10 years. During my time there, I got an M.A. in Advanced Japanese Studies from the University of Sheffield in the U.K. via distance learning. I joined YKK 7 years ago.

What skills or experiences did you gain from the JET Program that helped you get to where you are now?

Two skills I gained on the JET Program are public speaking and knowing how to be a self-starter. Prior to joining the JET Program, I was very self-conscious and hated speaking in front of a crowd. However, I had to give so many speeches in Japanese to so many organizations during my three years in Japan that I learned how to worry less about making mistakes and being “perfect” and focus more on connecting with the audience and telling a memorable story. I use this skill every day in my current role. I also learned how to be creative and come up with my own ideas about how to shape my position, even when there is very little direction. Not everything I try is successful, but I am not afraid to try new things and pivot quickly when it’s not going well!

What advice would you give to JET participants or future JET applicants when it comes to establishing a career after JET?

It’s said that an estimated 70% of jobs are not advertised. Do you know how you find out about those jobs? Networking! How do you network when you are an introvert and dislike walking around networking events shaking hands with a bunch of people you don’t know? You volunteer doing the thing you love! I started volunteering with the Japan-America Society of Georgia and the Japanese Chamber of Commerce of Georgia as soon as I moved to Georgia in 2001. Through those organizations, I met the CEO of YKK Corporation of America. Our paths crossed multiple times and we worked together on several community events. Years later this led to a position at YKK.

What was your most memorable JET experience?

I once was asked to attend a rice planting festival. Because I knew that planting rice would involve walking through the muddy rice paddies, I put on a pair of shorts and a T-shirt. My supervisor came to pick me up, and when I got into the car I noticed that he was wearing a suit. He looked at me, but didn’t say anything, and I assumed that he was wearing a suit because he had somewhere else he needed to go after dropping me off. When I arrived at the festival, I was told that I needed to get up on the stage and give a speech (that was the first time I had heard about the speech).

On the stage were the mayor and the entire town council, all wearing suits. At first, I was mortified, but then I remembered that my job on the JET Program was not to become Japanese but to be my authentic self and to find ways to promote mutual understanding and create ties between Japanese and Americans. So, I gave a speech and ended with a joke about how Americans dress casually for everything. To his great credit, the mayor spoke after me and said “She’s right! Why are we all wearing suits at a festival? Next year, let’s all wear shorts and a T-shirt!”