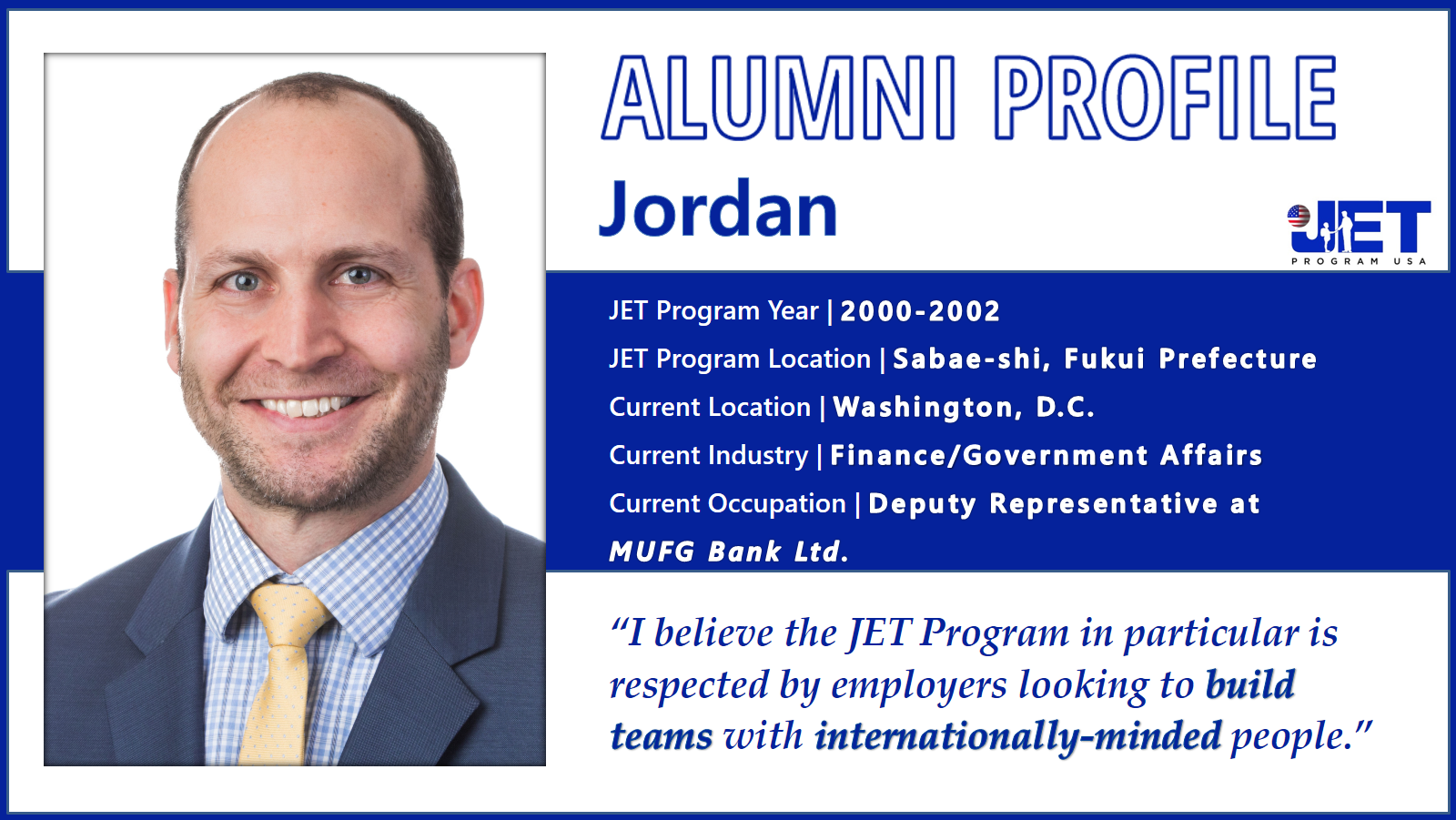 An interview with Jordan, a 2000-2002 Sabae city, Fukui Prefecture JET Program alum, who now works as a Deputy Representative at the Washington DC Representative Office at MUFG Bank, Ltd. MUFG Bank is Japan’s largest bank and the fourth largest bank in the world, having over 770 Japanese facilities, and 76 facilities overseas.

How did you end up working for MUFG Bank?

After JET, I returned to DC for graduate school and dedicated almost ten years to working on Asia policy in the U.S. government. I was a diplomat with the U.S. Department of State and later a trade negotiator with the Office of the U.S. Trade Representative (USTR). I was introduced to MUFG Bank‘s Washington DC office by a local friend (and former JET himself!). My current job keeps me focused on foreign policy and Asia, which remain my passions, while also exposing me to new opportunities outside of government.

How did your JET Program experience prepare you for your current position?

I’ve found that overseas experience–regardless of where you live–is critical to pursuing a career in international affairs. Honing in a bit, I believe the JET Program in particular is respected by employers looking to build teams with internationally-minded people. At an even more granular level, I’ve been surprised to experience just how extensive the JET Program network is throughout Washington DC, including within the government, running NGOs [non-governmental organization or non-profit organization], and working for Japanese companies. People are fond of saying that DC is built on networking, and JET is no exception to this.

What is your most memorable JET Program experience?

I was a two-time participant (but zero-time winner) in a sumo tournament for foreigners that was held every year in nearby Ishikawa Prefecture. We wore the traditional mawashi and “battled” in the dohyō. And of course, we all celebrated at onsen after.

What advice would you give to current and future JET Program Participants?

Approach the JET experience with the mindset that you will–or at least might–work in a Japan-related field when you return to your home country. I had no Japan experience before JET, and never expected that more than 15 years after leaving Fukui, my career would still be so closely tied to Japan. Really immerse yourself in the culture, focus on learning the language to the best of your ability, and remember that it’s never too soon to begin thinking about life after JET.